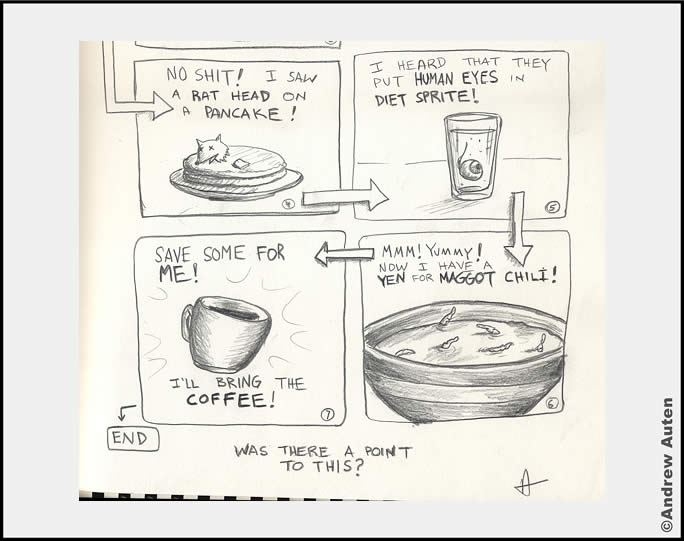 When I was a kid I always got really upsetÂ  whenever I saw dog shit or stepped in dog shit.Â  Dogs were allowed to run freely though all the various neighborhoods we lived in thoughout the 70’s, so there was always a lot ofÂ  shit in your yard even if you didn’t have a dog.Â  When I was old enough to mow the lawn, the dogshit situation definitely escalated.Â  There are few things as yukky as Texas-hot dogshit that’s been turned into an aerosol by the buzzing blades of a lawnmower.

When my wife and I moved to Austin last year, the front yard of our new house was really, really full of dog shit because everyone who walked their dog by our house knew that the house had been unoccupied, so they didn’t bother bagging up their dog shit even though Austin has some pretty strict laws regarding dog shit .Â  Shortly after we moved in I was sitting on my front porch and a dog-owner actually walked his dog twenty or so feet into my yard just so his dog could shit in my yard. Â  He didn’t see me, I suppose, or he figured the house was still unoccupied. Â  I waited until his dog was exactly half way into a poop when I yelled “What the fuck do you think you’re doing?”Â  The dog jumped, an undelivered log still dangling from his ass.Â  “I’m dog.” the guy said and he sprinted out of my yard.Â  He had actually said “I’m dog.”Â  I doubt I would have been able to come up with anything better than this, either.

“Pick up your dog’s shit!” I yelled after him, “Get back here right now and pick it the fuck up!”Â  He broke to a full run, pulling his yapping animal with him.

I am not in any way proud of my actions.

SuddenlyÂ  people stopped letting their dogs shit in my yard.Â  Perhaps word got around at the dog park that a crazy-man had moved in to the house on Lee St. Â  But there seemed to be two people and two dogs, that didn’t get the message.Â Â  One dog left impressive gorilla-doots that reminded me of lightly fried tofu franks.Â Â  The other dog must have been much smaller, and left little rambling trails of pencil-thick curly black evil.

I made a few signs and placed them in the the yard.Â  “Stop Letting Your Dog Shit In My Yard” the signs read and I drew arrows on the signs pointing to the offending mounds.Â Â  Perhaps they didn’t see the signs, perhaps they treated themselves to a little defiance.Â  The dog shit continued.Â  I added more signs: “What makes you think I want to track your dog’s shit into my house and all over my carpet? Does this make sense to you?”Â  To further objectify the shit, I nailed squares of cardboard into my yard and put the dog shit on the sheets of cardboard.Â  “Are you fucking kidding me?” the signs read.Â  I added a new sheet of cardboard and a new comment every time I found a new infraction.Â  I even supplied plastic bags.

I was surprised at how many of my neighbors liked the signs.Â  I was introduced at a block party as the sign-guy.Â  So many people shook my hand and told me how funny the signs were.Â  Weird.Â  I think the signs just made me look crazy.

Gorilla dog was the first to quit.Â  No more giant tofu poops.

Teeny dog was another matter.Â  That continued. Â  Worse, I figured out who it was.Â  My next-door neighbor had a horrid old pug, totally blind and barely capable of locomotion.Â  The wretched thing just stumbled around, dropping little dog-flops.Â  Sad.Â  Very sad.Â Â  But my neighbor specifically walked his dog to yards other thanÂ  his own so his creature could empty himself.Â  Like I said, sad.Â  But it hadÂ  to stop.Â  One evening I met my neighbor as he was walking his dog and I steered the conversation to my few remaining signs bearing the sun-dried remains of his dog’s shit.

“I’m glad it’s not you and your dog,” I said, “Things would be awkward between us if it were.”