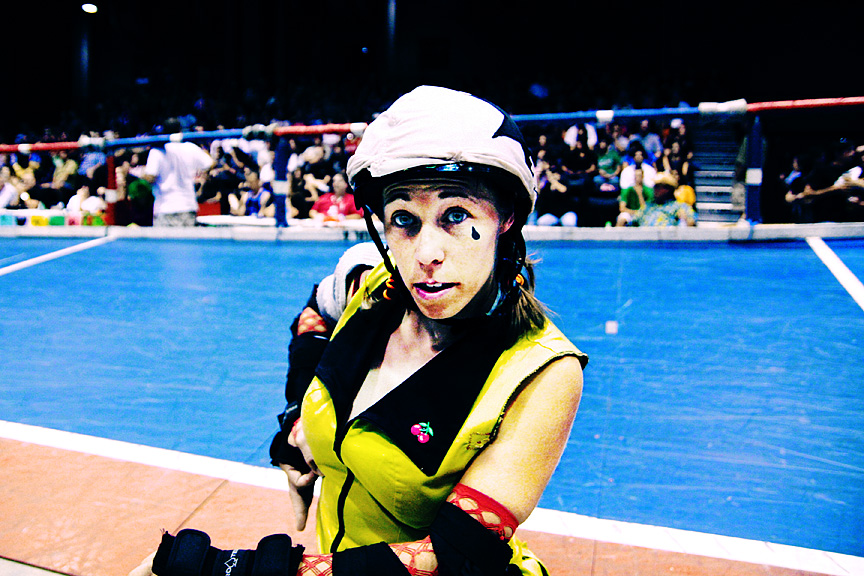 Revenge Of The Rollergirls

Dec.Â  22 Camden.
Re:Â  The Roller Maidens vs. Death On Wheels at the Drano Pavillion, Annex “C”.

Mr/s Wong
Please understand this is only an exhibition, so dial it down a notch.Â  During normal seasonal play we expect a few deaths but as you well know, reanimation isn’t cheap.Â  If I see another wolf on the track wearing a Death On Wheels jersey, we will file a grievance.Â  A friendly warning, nothing personal.

Looking forward to see you on the track!

Re: Re:Â  The Roller Maidens vs. Death On Wheels at the Drano Pavillion Annex “C”.

Henny:
Great to hear from you.Â  You think the deaths have gotten out of hand but? Once the girls are out on the track, they’re on their own and I can’t control ’emÂ  That’s showbiz so file whatever the hell you want. My lawyer can eat you alive.Â  Ask around.

Skate fans were shortchanged during Monday night’s exhibition match at the Drano Pavillion when the Roller Maidens of Perth Amboy murdered Camden’s own Death On Wheels in only three rounds of roller-play.Â  Advertised as an average pre-season skate-em-up, the game turned ugly when Death’s principle jammer, Holly-Go-Deadly, took on serpent characteristics after ingesting a potion of some kind. The Maidens immediately regrouped inside the Pentagram and received the Dark Lord’s blessings.Â  This bold opening gambitÂ  caught Camden off-guard as two of their alternate blockers were consumed in pillars of fire beforeÂ  team shaman Becky “Spellbinder” Spellman could fire off a protection incantation.Â  At game’s end, among the smoking corpses of her team, the Wheel’s manager said, “I guess they just wanted it more.”
_________________________________________

I think I wasn’t cut out for a life on wheels.Â  Please don’t be disappointed in me.Â  I did my best but I got consumed in a pillar of fire during a simple exhibition in Camden last Monday.Â  I am better now.

Mr/s Wong said that no one else but h/mer (?) knew that my mom was the Maiden’s great Dawn O’ DestructionÂ  – so at least I did not have to live up to that.Â  Phyllis Killer bragged about her mom all the time but I don’t remember who she supposedly was.Â Â  Still, some of the girls were not nice to me mostly at the beginning but I think they wanted me to be good so I would not get hurt and also so I could help my team win.Â  Sometimes they reminded me of you.Â  They played so hard and it is a lot more dangerous than it looks on the television or even when you are sitting in the audience.Â  Of course you know that and you did your best to warn me.Â  I am stubborn like you, I guess.

When the unholy fire encircled me with it’s blazing wings, I have to say I was relived.Â  Am I a scardy-cat for admitting that?Â  I was relived because I was a scardy-cat.Â  I shook all the time at camp and could not sleep.Â  Some of my hair fell out and I threw up my dinner and my breakfast.Â  I hope you still love me anyway because that has scared me more than anything else.

Send money so I can come home.

Re: Re: Re:Â  The Roller Maidens vs. Death On Wheels at the Drano Pavillion Annex “C”.

No hard feelings, honest.Â  Sure, I didn’t expect to see most of my girls explode like rotten tomatoes but the crowd loved it and what’s good for the league is good for the team, I always say.Â  What a night, huh?Â  Ever see so many angels?

Also, since the rumors always come out before the press release, I just want you to know we are switching to Gnostic Charismatic Christianity.Â  If you need any of our old props or uniforms, let us know.Â  Maybe we can work out some kind of trade.

P.S.
Things are growing and falling off me like I’m a fuckin’ apple tree!Â  Ha ha!

You smartass imp.Â  You knew damn well that we already scouted a Gnostic Charismatic jammer from the New Ozarks.Â  I just retained an blind Tibetan oracle who says your next dick is gonna grow back sticking right up your ass.

We love you no matter what.Â  Bus fare is enclosed.

Photos taken in Austin, Texas 2009.Â  Story faxed in from the past.