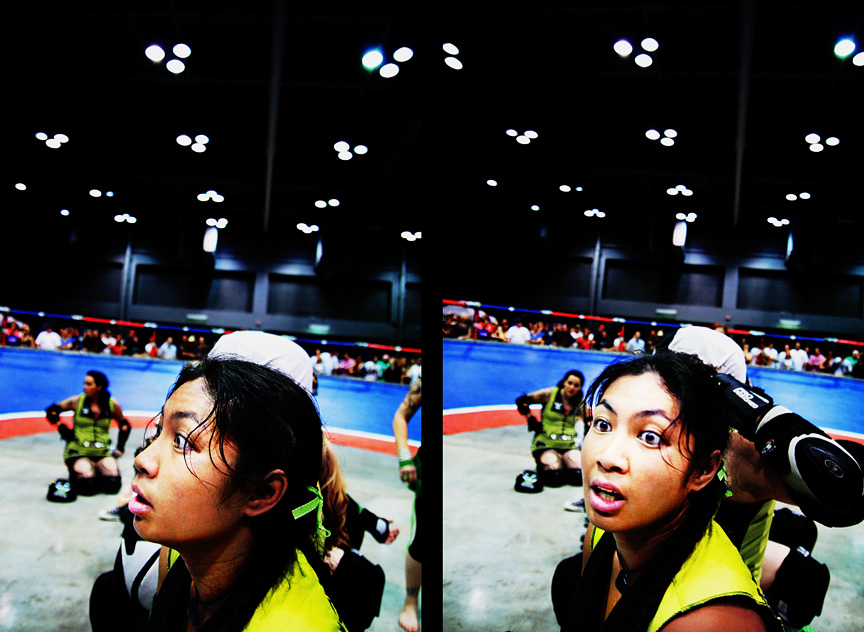 The Rollergirls Strike Back

Above the sprawling village of Xemi, Hayden Market hugged the mountain along sixty miles of narrow switchback.  From the valley it jagged like a bolt of lightning etched into the rock face from base treeline so dense it was nearly black all the way to the oxygen-starved peak hidden in a crown of churning mist.  The market should have died a long, long time ago but the great logic-neutralizer, religion, insisted that things stay as-is.  They did.  The market definitely pre-dated The Savior (which isn’t saying much) but by how much was anyone’s guess since science in this area was forbidden and every scientific expedition was kidnapped and tortured or eaten.

I packed as much science-y gear as I could and hid it among the native-common things I carried: a walking stick, a satchel festooned with rags and terra-cotta rodent gods, furry boots, a long robe made of bull skin and a common fedora-like hat the Hayden for some reason called a bowler.  Go figure.  The little hotel in Xemi where I was to meet my coyote served as my classroom on how to carry myself among the natives.  If I learned the ways, he would not be able to spot me even though he supposedly possessed the holographic eye.  That always sounded like bullshit to me.   If that were the case, then he’d already know how I fared.  If I were to fail in the future, he wouldn’t have agreed to help me. Maybe. Holographic knowledge or not, the guy had bills to pay. Anyway, I spent the better part of an entire planting cycle learning how not to get killed in the Market.

The Interfaith Roller League set me up with a teacher who had defected from the Xemi, at least economically if not culturally and spiritually.  He was supposedly a full-on Hayden Xemi, a Doofnac Xemi, in fact.  Like everything else the Xemi did, mysterious and baffling behavior ruled, thus I was not allowed to know ahead of time who my teacher was, but rather the teacher would reveal himself to me at a time and place of his choosing.  So I kept busy posing as a tourist during the day and sneaking out at night dressed as a local, testing out whatever new thing I had learned.

The Xemi and Haydens have a strange way of walking with their heads down and off to the side like whipped dogs, moving along in small quick steps – a far cry from my home town where such behavior would get you shot.  There, you held your head up and shouted curses if you wanted to live.  Strange to be among a people that had no knowledge of such noble doings.

The bar was small and packed and yet no one seemed to notice the two giant birds stumbling across the bar, knocking drinks over and tipping the dishes of Spanish peanuts and trail mix.  Next to me, a young woman had preserved her drink by putting her hands protectively over the glass, so I did likewise.  My drink was expensive and I certainly didn’t want bird poop in it.

“Yap yap!” she yapped and slugged back something green and sticky from a heavy tumbler.  She fweeped a dainty burp and turned to me.  “You come here often?” she asked, “I’ve never seen you here before.”   I had heard a lot of opening lines before but that was a new one for me.  Who did she think she was?  Was this even normal?

“Are you my teacher?” I asked, raising my voice as loud as I dared over the increasing bird sounds. A few other patrons had themselves turned.  A few were giant crows but I recognized a robin and a grackle. I guess bird manifestation was contagious.  Either that or they were doing it to be polite or as a show of support.  Fuck if I knew.  This town was nuts.

The woman, a small well-boobed shrub wiggled her empty glass at the bartender, signaling for a refill.  I did the same.  Who knows, he might well turn in to a bird and then I don’t know how the hell we would get our drinks.  Birds do not have hands.  The woman smiled, “My name is Shirleigh.  I suppose you don’t know that.  You are not from around here, I did not recognize you.  I pretended.  But you have to be careful.  The Xemi region has been unsafe lately, new breeds of men and animals crossing over our borders because they maybe saw something on TV that made them think that is is a land of opportunity. Maybe for some it is, if you learn our ways.  But these interlopers, these  mercenaries of spirit aren’t here to take snapshots and take home a few baskets.  They have their eyes set on the Hayden Market.  Is this why you are here?”

I couldn’t tell her the truth because I wasn’t sure what it was but I got as close as I could.  “I am here to take photographs and buy baskets to take home, ” I said, “Nothing more.”  But Xemi is a strange place where normal bullshit has a different effect.   As I spoke, my hand  deflated with a farty whizz, well audible over the now-deafening chatter and squawk of birds and other animals and my glass slipped slipped through my spaghetti-fingers to the bartop and cracked in two.  Fuck. I saw my seven-hundred-dollar mai-tai dribbling onto the floor.  What do you tip for that?  The bartender had turned by then but thankfully he chose the form of a monkey of sorts so he was able to wipe up the mess with his feet while he mixed me a fresh Manhattan.

He sang a song:

I runs the pub
The ghosts fill the cups
Radiation in the walls
Pay the bills
And what the fuck does that mean?

I tucked my beak down.  Shirleigh can  wait.  The market can wait.   Sleep would be nice.