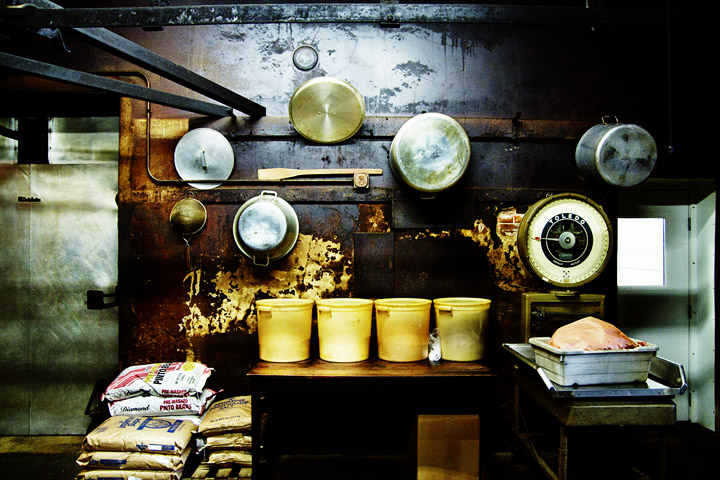 The Crack Of A Dawn.

As soon as our mono-browed ancestor, Pit-Man, Â emergedÂ from the primordial sauce, he was grouchy and peckish – announcing to a nearby dinosaur that he could Â “go for a little something.” Â Thus, began his earnestÂ millennial-long search for a decent restaurant. Â But parking was inadequate due to all of the lava-spewing volcanoes so he went home and waited for pornography to be invented. Â  During this depressing epoch, known as theÂ FlirtatiousÂ Period, barbeque Â was unpopular because most of the animals we wanted to eat could fight back.

The Age Of Brownish Things

Man had just gone through a messy divorce from his hairier half, which was hell on his self-esteem. Â No one would return his calls. Â Wok-cooking was theÂ preferredÂ method of food-preparation even thoughÂ everyoneÂ secretly hated it, especially the bamboo shoots. Â They are gross. Â This led to the first attempts at barbeque which consistedÂ of feeding Â hot coals to lizards. Â This is how we got dragons and Ron Paul.

The iron-penised will of the early Church became flaccid (a.k.a. The Roman Deflation) as men of reason discovered medical marijuana and began wearing their wive’s underwear in public. Â Soon, they would beÂ attendingÂ poetry slams and early versions of Burning Man where real men were burned alive while crappy techno music was played on the lute. Â This age also saw the birth of the ironic moustache and Morgan Freeman.

An early barbeque sauceÂ recipeÂ was contained in the sprawling masterwork “Ventosa Stultior” (The Windy Idiot)Â by noted Italian inventor/architectÂ Chevy Vega wherin he asked burning question “Cur mea inguine odorÃ¡bunt tam malus?” or, “Why does my crotch smell so bad?” Â Although not a barbequeÂ recipeÂ per se, this passage shows us how funny the word “crotch” is.

The boozy, wild night of invention and finger-banging wasÂ followedÂ by the remorseful shame-filled morning of regret and barfing as orphaned children and special “interns” were introduced to exciting New-World careers which consisted mostly of doing horrible things all day and then dying. Â These hearty “Sluppies”, as they were called (short for Slaved-Up), found inventive new ways to eat the bundles of twigs they were given at suppertime by their benevolent owners. Â Addled by an acute DoritoÂ deficiency, Sluppies would attempt to cook these twigs with flaming sides of beef. Â The results were eaten as-is or sometimes thrown into a pit along with any hope of living a decent, free life.

Eventually the cooking process was perfected by Colonel “Slim Jim” Gates who then went on to create Microsoft, Â becoming a dominant player in the homicidal coal-powered robot industry and the largely-ignored Zune. Â He called his new food “soot fritters.” There were no takers.

When the rich, hickory-scented clouds of war wrapped our world in a savory blood-soaked History Channel special, weÂ discoveredÂ no remote control was powerful enough to TiVo this to another generation, whatever that means. Â Although no sane man desired it, the war was necessary because we had to find out why Hitler’s car was parked over at our ex-girlfriend’s house all night. Â Had they been seeing each other all along? Â She said they were just friends but we were not so sure.

While overseas our boys in uniformÂ discovered, among other things, that their helmets made great toilets, French women are actually men and that artillery-blasted cattle made for some good eatin’. Â And French women are men. Â We mentioned that, right?

At war’s end,war-hardened veteranarians such as Mac “Ribs” McDonalds and G.I Bill Â opened some of the first trueÂ barbequeÂ restaurants/pet crematoriums. Â Eventually the crematoriums were turned into Arby’s, Â finally allowing barbeque to stand trembling on own it’s stick-thin, blackened legs for the first time. Now we could get some fucking barbeque.

Hey, man. Â Tune in. Â Turn on and SMOKE OUT, slowly over a long period of time!

Bookended by theÂ assassinationsÂ of Jerry Lewis and the accidental drowning of Charlie The Tuna, this period of tumult and upheaval saw enormous change and social progress which scared the shit out of old white men who wanted to know where dinner was. But it wasn’t all race-riots and giant collars. Â Skirts became shorter and drug-fueled trips to the moon in overstuffed Volkswagen vans became all the rage. Â During the first moon mission, the astronauts were fed nothing but pulled-pork barbeque and a side of their choosing, culminating in Neil Diamond’s famous quote as he first set his funky foot on the moon: “Houston, I’ll have the slaw.”

Our modern era has seen a vast and flatulent explosion in “high-tech” smoked and grilled meat technology starting with Â BTP, or Brisket Transfer Protocol developed at Cal-Tech with a generous grant from Carl’s Jr. Â Originally intended to allow absent-mindedÂ scientistsÂ to send each other baloney sandwiches, the technology was quickly utilized to trade pizza slices and hotdogs. Â  The pinnacle achievement was the successful transfer of an entire country ham between a research station in the Soloman Islands and an orbiting Russian lunch counter.

The field expanded to include a new pure-research discipline known as Q-Theory.Â Perhaps best-known is the Â “Buffalo-Wing Uncertainty Principle” which posits that we may know both the cost Â and spiciness of a wing but not it’s probability of making us haveÂ diarrhea.

The Future Is Fatty

What’s on the horizon? Â Will we be too chubby and out-of-breath to even look that direction without having a stroke? Â Perhaps, but we very well may not have to move our blob-like bodies at all with such exciting new ideas like the HyperFlank Virtual Beef Helmet rumored to be in the initial research stages at Los Alamos. Â Consider LucasArt’s Â RibDroid. Â ManyÂ believeÂ this will produce overblown rib dinners that get bigger and more disappointing with each new meal. Â Perhaps we will live in aÂ wondrousÂ future populated by genetically-enhanced self-smoking chickens as envisioned by legendary food scientist Louis C.K. Â We’ll see. Through the smoke, we’ll see.

In the meantime – tell that grouchy, hungry Pit-Man that his pornography is ready.

He Broke Some More Again