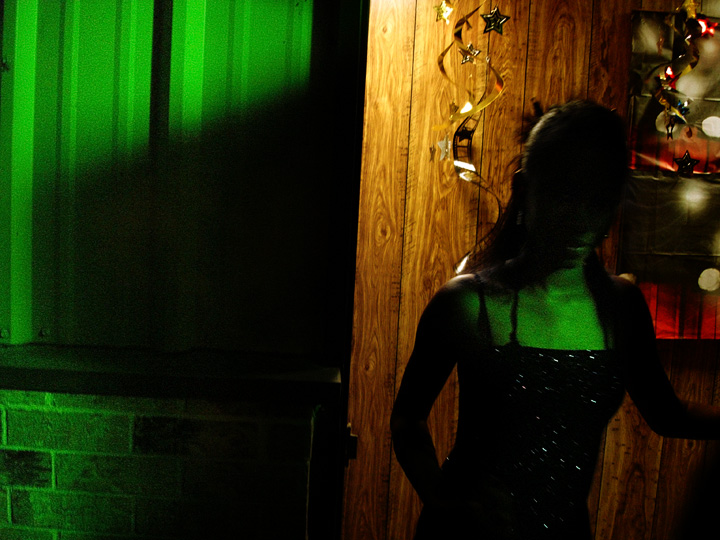 As a group, they could become a living thing so large.Â  Vodka fog swirls from vomit-lips.Â  The multi-armed monster howls radio songs in between rectal violations, in between trips to the Waffle House on the way to a deep nap on the garage floor.Â  She is not alone.

Something in the paint cans and the green-gasoline funk of lawnmowers struggles for air.

Rosa thinks Natalie isn’t so interesting and Natalie isn’t such a good friend and Natalie needs to lose a few pounds. Lisa rubs the midnight veil from her eyes just in time to see Natalie’s wiring sizzle out.Â  Natalie’s fat limbs jerk open and closed, a pink spider shaking in a puddle of Windex.Â  Rosa says out loud (or silently) this is sad.Â  This is funny. Dangerous?

The hotel window is a gaping, ruined mouth yawning over a blind hangover.Â  A few rags of window curtain Â  wave absently: wake me later. The window-adjacent overpass hums and tweets and wails as the blood of transit and traction heaves through the dizzy roads.

She asked for more speed.

Black concrete night thunders through the windows: the shred of refinery-fire sky is a blinking dance of galvanized barriers and sodium yellow.Â  Angel skulls fly against the snowflake ink, each strand of amber hair jerked into the dry clouds.

She thinks his kisses are peppermint honey.Â  His exertion-wet hair dries into an exotic sun-copper curl the diameter of her index finger. The room is quiet except for the ant-leg staccato of his thumbs jittering the colored buttons of a game controller.Â  Against her will, Natalie is reminded of an empty pie plate when she looks at his “concentration face” as he urges an electronic ghost to fight on and on. He is just flat-out dumb. During a semester evaluation, Mrs. Kattenberg says she thinks he is “beneath her” and Natalie laughs out loud and agrees as she imagines the idiot beneath her foot.Â  Beneath her body with his goggling pie-plate eyes.

The ocean spray, the rock and rumble of the ferry eased away some of the weed and vodka.Â  His head clears a little and he wishes he was asleep instead of sorta-drunk, kinda-high. He leans over the railing as far as he can and spits burrito taste into the lurching gulf water. A rusty goo swirls in clotted spirals around the boat.Â  Fish, dead or gasping in death, slap the hull and send up a rotten cloud that blends nicely with the shit stink coming from his car trunk.

The ferry is nearly empty in this black burlap hour and rides high along the spikes, jumping and rolling in giant sleepwalker strides.Â  A stab-wound sunrise leaks across the horizon exposing in blood light, at last, the smoking wrecks.

A monster sleeps under the sagging waves.