so is the threshold 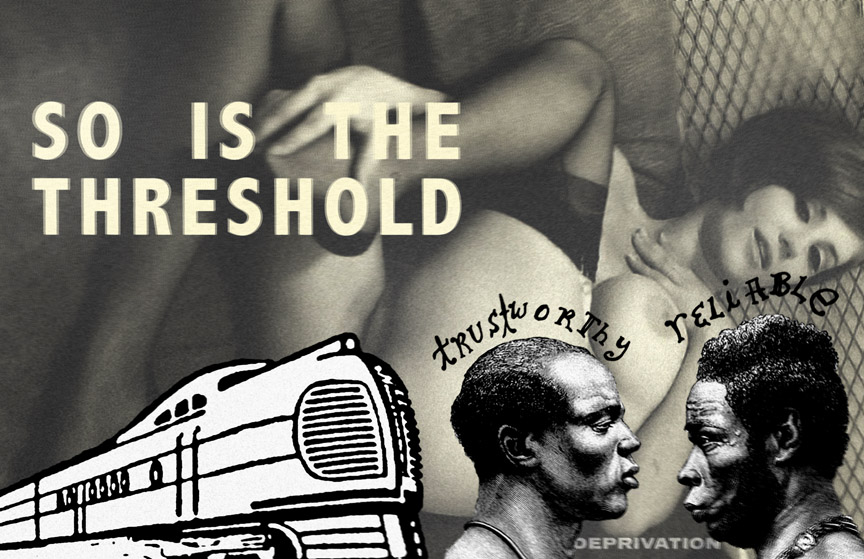 so is the threshold

On Friday, 1861, under the winter-crystal skies of Cormorrant, Utah, the last spike was driven through the creosote-soaked skin of the last mighty oak tie of the last rail of the Flandsen-Pacific Railroad Company’s Inter-Mountain Reproductive Line.Â  The spike was pounded home by none other than the esteemed founder of the FPRC,Â  Ebersole Horace Flandsen himself.

Today he would at long last stoke the fires of his beloved Iron Donkey, the mighty “Mountain Fucker” Locomotive and pilot it through the granite passage of Volvere Peak, Utah.Â  The tunnel had been designed using a new engineering technique developed by the philosophy-mad Eastern Europeans called the “All-Ingress Tunnel Method” which, simply defined, is a tunnel with an entrance but no known exit.

Among the jaggedÂ  rocks of the high mountains, a crude but brightly-festoonedÂ  platform had been built to support aÂ  humming throng of guests, dignitaries, press representatives and their prostitutes. The platform’s vantage was perfect, allowing a grand view of the train, track and newly-dug tunnel.Â  Attendants and slaves stepped quickly to their tasks, bringing bourbon, food or vomit-bags, as the situation warranted.

Below the hewn-pine platform, within a narrow valley blasted right out of the living Utah rock, a shining double-rail of steel stretched from the far horizon to the dark and sexually ambiguous tunnel cut into the face of a sheer basalt cliff.Â Â  The tunnel entrance was ringed with tough desert shrubbery, which was being trimmed back by real Scottish greensmen shipped in at great expense by Mr. Flandsen.Â  Flandsen would recoup some of this expense by eating the greensmen for dinner.

Seated on the viewing platform beneath a fluttering American flag was the mayor of Cormorant,Â  a reserved and dignified publican implausibly named Meteor Rocketpants. Â  Next to him sat his round, pleasant wife, even more implausibly named Meteor Rocketpants.Â  They were notÂ  related and yet each privately thought they knew each-other from somewhere, although this suspicion was never openly discussed.

“Why are we here?” Mrs. Rocketpants asked, “I don’t understand what I am seeing.”

She squinted though the lenses of her gold opera glasses and did her best to interpret what her tired old eyes were seeing, but it all registered as chaos and mystery.Â  During the 1860’s, learning disabilities were poorly understood.Â  But today, with our greater understanding of the human mind, she is what we would call “stupid.”

“Well, you see, woman, ” Mr. Rocketpants began, “Before you is the culmination of God’s greatest gifts to flesh-and-blood men.”Â  He swept his arm grandly, as if opening a curtain to reveal the scene below. “And those gifts are iron, steam and slave labor, ” he said, pointing to the rails, the hissing locomotive and the blackened Chinese filling the coal-bins.

Leaning on the handle of a 18-pound sledgehammer, Flandsen posed for photographs.Â  No photographers were present so to cover the awkward moment he pretended to watch an airplane fly overhead, which was pointless because they had not been invented yet.Â  As soon a they were, he would return to this spot and admire it.

Sensing the futility of it all, he threw the sledgehammer over a cliff and climbed the stairs leading to the viewing platform.

Flandsen was joined by the seven or so remaining Chinese cyborgs he had created, once part of a vast smoky, steaming army of compliant coal-powered slaves who wanted naught except water, rice and a place to dump their ashes once in a while. Yet they still attempted to form a union.

Also present were members of the board of directors for the Flandsen-Pacific Railroad Company including the reclusive Siamese twins, Rufus and Galant Twerd, two industrious souls most cruelly joined at the penis since they were fifteen years old.

The Twerd brothers were almost clairvoyant when it came to matters of money, guiding the railroad’s finances to heights enjoyed only by the world’s three most fashionable dictators.

Starting with only four cents and some twine, they built a vast financial empire which tragically ended when they accidentally locked themselves out of the office, a mistake they would have never made again had they not been killed and eaten by foxes. How they made it back from the dead is anyone’s guess.

In preparation for this event, Flandsen had hired the Brigham Yeung Secondary Brass Band to play rousing marches and hymns to accompany the inauguralÂ  firing-up of the hulkingÂ  steam engine.Â  The high altitude and thin air of Cormorant, Utah, proved to be too much for the band and none had the wind to play their brass horns with any spirit or conviction.

So Flandsen was to be introduced, musically, only by the furious beating of a lone triangle by the sole band member who had not yet suffered a stroke.

Flandsen was so deeply moved by the sight of the plucky triangle-player that he vowed right there and then to leave his entire fortune to the lad: a boy of twelve with wavy, gold flaxen hair that was easily ignited by a stray cinder from the heaving smokestack of the chuffing steam-engine.Â  The fire quickly spread from the boy’s beautiful hair to his dry wool band uniform and within seconds, consumed the child and silenced his staccato ting-a-linging forevermore.

Moments later, Flandsen forgot all about the boy and silently wondered why there was no music. Had he hot seen to it that a brass band would be present?Â  He felt pouty.Â  He was still waiting for that airplane.