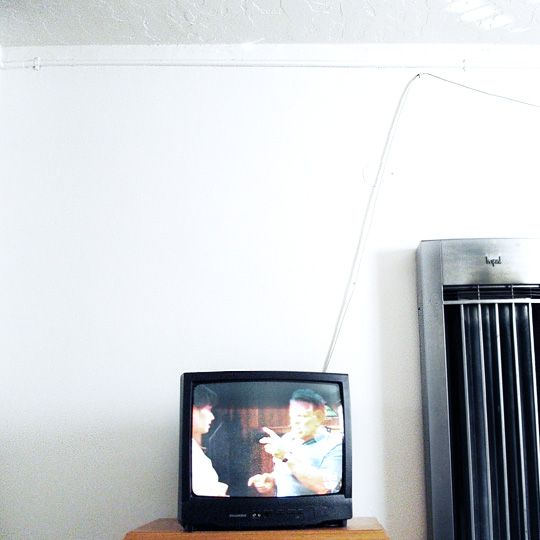 He took two suns from the door, high over the white desert and thanked God.Â  Nearby, a highway would sometimes buzz and thrum but he did not know what the sound meant and to his new ears, he thought it would be dangerous.Â  To him, anyway.

The suns in his hands castÂ  writhing lanes of light into the sand and agave, chasing beetlesÂ  from their hiding places.Â  The Salesman, very impressed, whistled high one bright note, “Sheesh, man, I think you done make a universe there!”Â  He slapped his hands across his pleated legs and danced the same way he saw Walter Brennan dance on the TV.Â  “I think you need a name,” The Salesman said, “I had me a puppy named Infinity that died in a bear trap.Â  How’s that name sound to you?”

He said the word, “Infinity…what does it mean?”

TheÂ  Salesman looked for a good answer.Â  He knew it meant dead puppy but surely there was meaning beyond that.Â  The Salesman zig-zagged his sulfur-yellow nails through the twiddled remains of his white hair.Â  “I think it means something that don’t end.Â  It kinda goes on.”

“But your animal didn’t go on,” He said. The suns turned and roiled with intelligence.

This made The Salesman smile. “The fuck he didn’t, ” he laughed, “That damn dog went back into the universe like a leaf caught in a river.Â  He’s a baseball player or a lava rock on some new world that got spun off a star.Â  Might even be another puppy for all I know. You might be him!Â  Wouldn’t that be something?”

The puppy got cut in half when it wandered outside The Salesman’s home when he was a boy, in some distant life.Â Â  The boy he was cried and thought, at the time, that the world was shaping up badly.Â  He was afraid that nothing but deprivation and lack awaited him.Â  He looked at his mother and father as if he’d never seen them before.Â  Their faces carried the weight of knowledge.Â  How had he missed that?Â  He wondered what it was that made them go on day after day knowing damn well that the bear trap existed.Â  The iron bear trap had cut off the back legs of the little baby greyhound.Â  In confusion and desperation , the thing had chewed at it’s own entrails.Â  The Salesman wiped away a seventy-year-old tear and gave it to the desert air.

Photos taken at The King’s Rest Motel in New Mexico