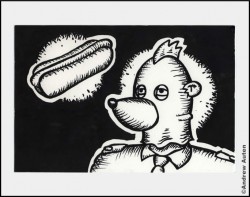 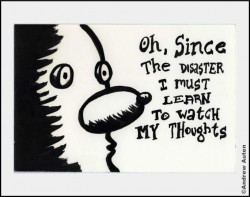 I remember so clearly the first time Commander Puffy came to our LearningSchool.  We had just given our full attention to a fascinating and gratifying  lecture on topsoil when, unannounced,  a Chairman Vertical Representative strode confidently and efficiently to the main talking plank of the watchroom, pushing my Unit Mother to the floor.

“Children Citizens,” the Representative called to us, “Today we are doubly privileged to have an excellent human war product!”  Not knowing what else to do, we removed our mittens and clapped strong hands with visible, decent enthusiasms.  “Sporpy, the Good Citizen Horse!”, a child cried out.  She was removed from the watchroom,  beaten, and returned to her seat.  I loved the Sporpy films and books – and I still do – but that’s no reason to impulsively shout.  That behavior is enemy.

“No – not Sporpy,” said the Representative, “I have come directly from the Chairman’s Office of Vertical Colors with…” She smiled and wiggled her hands above her head.  Then she showed us her breasts and pretended to bite one of them.  We knew what this meant!  Oh, ho-ho!  “This can’t be,” I thought, “Here?  Now?  At this most humbly glorious and still humble (but glorious) Post-Parent LearningSchool?”  The children expressed more elevated decent enthusiasms. “It’s true,” the Representative said, “He is here for you.  Observe! Behold!  Attend!   Commander Puffy!”

We, bright-eyed future gears in as-yet unbuilt, undreamt machines,  were too excited to utter a single sound.  I tried to make yellow water in my trousers but could not.  This is a skill I have since perfected.

A six-man Honor Guard stamped onto the stage first.  After several minutes of rhythmic shouting and synchronized rifle-tossing,  a woman dressed as an Intellectual was mock-executed with a scythe.  Next, a Puffy Booster took the plank and blew notes on a curly metal horn signaling the arrival of the Commander’s Phalanx.  Like Puffy, the Phalanx is comprised largely of dead soldiers.  Also like Puffy, they do not show their flesh faces.

Depending on the event the Phalanx can consist of as few as five and as many as eighty soldiers – space and interest permitting.  Our LearningSchool was only a humble (but glorious) place so there were  five Phalanx.  They took the plank with a rousing shuffle of worn boots and ecru-boned feet.   The odor was a full-force face-pancake of former victory.  Flies buzzed and  unborn insects danced in moderate, reasonable ecstasy.  The most animated and probably youngest Phalanx drew back a tiny curtain in his mask and recited:

The Phalanx withdrew or fell down.  Under a shrill, encompassing  storm of cheers, praise and wailing, Puffy was wheeled upon the plank.  This was during the 286th Ice Season, so Commander Puffy was definitely long-dead.  Still, he showed a remarkable amount of awareness as the cover was removed from his chamber and an amplification device for the hearing of sound was affixed to his chest.  He even moved his head and hands!

From the records, thus spake Puffy:

“You are green corn tested to meet combat requirements.  Rot, ergot and living things fight for your sugar-packed flesh, and get the intelligent crossbreeding,  is useful.  There is an iron shortage!  I’m sure? Yes.    FIRE YOUR GUNS! EAT THE DEAD!  Emily?  Are you there?  Did you get the package I sent you?  Yes, those are a lot of ears!  I hope the teeth come in handy.”

He paused as a fanny-toad slid from his pants cuff.

“A steel rifle can support freedom or tyranny so watch where you point that thing.”

Commander Puffy fell then into a sleep that only soldiers can fathom or endure.