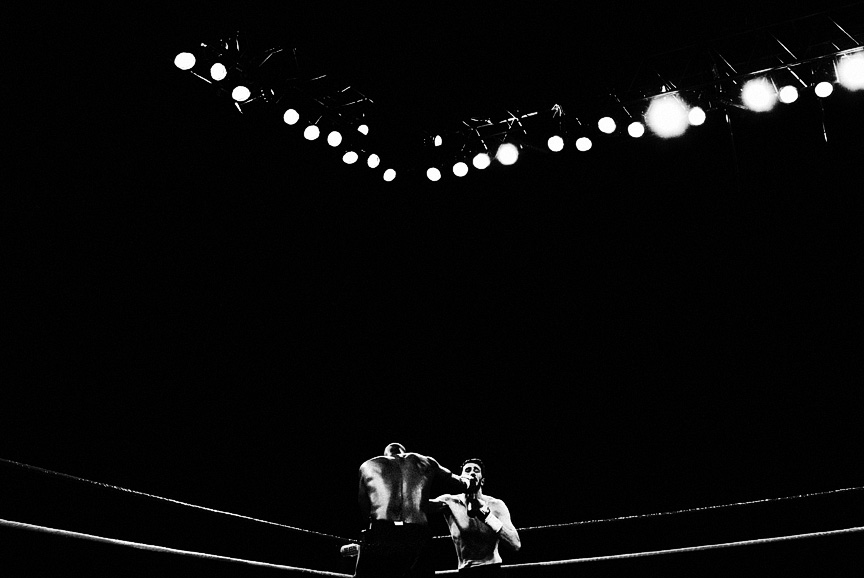 Man, I wish I liked sports.  The people that like sports seem to get a lot out of it but whenever I’ve tried to watch football or baseball – whatever – I end up daydreaming or worrying about how much time I am wasting watching some contrived, logo-blotted douchebag festival.  So, no.

Boxing?  For some reason, yes.

Other than running, boxing seems about as basic a competition I can think of.  That’s a big plus.  It takes place on a stage which makes it more like theater and I mean that in the absolute best possible way.  Theater is the externalization of the private, internal, personal mind and so is boxing.  And like an actor, a boxer must tell the truth, listen to his director, play off the actions and rhythms of his fellow actors.  Sometimes they have to follow the script as written but that is another issue.  Also, like theater, a bout has a beginning, a middle and an end.  It has heroes, villains, deceit and redemption.

Have you ever watched a show, a play, a movie, and you look at actor and say, “He has no idea what he’s doing up there. He doesn’t know what the scene is about, he doesn’t know who his character is, he is utterly in over his head and he’s bluffing through this,”  Demi Moore comes to mind.

There are actors that always know what’s happening,  they are not bluffing and throughout the scene they are creating.  James Cagney was definitely one of those actors.  “Look ’em in the eye and tell ’em the truth,”  he’d say.

This certainty can take many forms.  Some boxers are scientists, technicians.  The fight has been worked out in their minds and the fight itself is just the conclusion.  Some boxers are total fucking maniacs who don’t care how it happens, but they are going to cover the canvas in blood and walk out with their arms up.  My favorite boxer is the heart-boxer.  Ali was, at the center, a heart-boxer and so was Holyfield.  Even though he doesn’t exist, Rocky was the epitome of this kind of fighter.  I have been moved to tears many times watching a match that is being waged and won on heart.

No less important (and maybe even more important) is the boxer who steps into the ring and you can see that he knows he’s attending his own funeral.  It’ a terrible moment when this man’s eyes lock onto the eyes of the man who’s going to hand him his ass on a platter but he puts up his gloves anyway. He fights.

And that’s telling the truth, too.

I took these pictures at a TKO Boxing Promotions fight September 2008, Austin, Texas.  Thanks to Fred Vega.